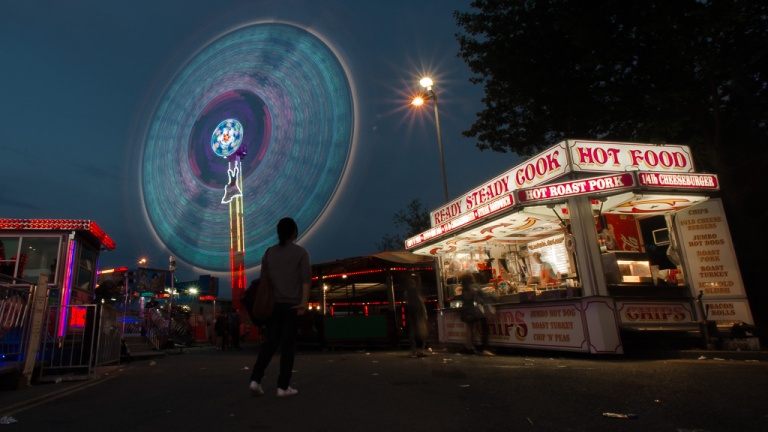 Ever since a night out as a kid where I saw the waltzer operator nick a wallet from a customer and a guy got his nose smashed in by a kick to the face right in front of me.

However, one is in town, and those events were over 25 years ago, so I grabbed my camera bag, wide angle lens, min tripod, a filter and headed down to play with the lights and slow shutter speeds.

Got stopped by the police by a footbridge as there was a fight going on on the far side so had to walk round.  Only passed two crying girls before I got there.  Then I was faced with what I can only describe as a shower of drunken knob heads.  Still, they were having fun and loving it.

I sat on a path, set up the tripod and then spent 30 mins silently cursing all the people who jeered at me, stood in my way and slurred, “Take a picture of me mate” accompanied by arm-round-my-buddy poses and gurning faces.

I managed a few clear shots, and although at the time this lady was in the way of me getting the big twirly ride as she watched her friend on the ride to my left, she then turned and seemed mesmerised by the food stall I’d included in the frame – long enough for a pretty decent silhouette for a  6 second exposure – I like it.

I’ve included an extra shot today, not what I wanted due to annoying elements, but I do like the colours and arcs.

The town looks like a bomb has hit it: a bomb filled with broken plastic pint glasses, squashed lager cans, girls staggering on high heels and blokes called Dave who have drunk far too much and are sleeping it off by a comfy kerb.